The most widely used for pizza dough are the twin arm and the spiral mixer for their ability to oxygenate the dough and create a tight gluten mesh, giving better structure to the dough and allowing flour hydration (up to 100%).

The fork mixer, despite its success in the past the is now not widely used by the pizza chef. One reason is that it is a slow mixer (increased heat energy) and it can only mix dough with water content up to 58% – 60% maximum. The other reason why the fork mixer is in decline is due to the advancements in the spiral mixer – the pizza world and market has evolved, pizza chefs now have more knowledge and approach dough-making in a different way. They are less likely to follow the crowd and more inclined to research and learn themselves.

We will look at the twin arm mixer later in a future blog and for this one we wish to concentrate on the spiral mixer. 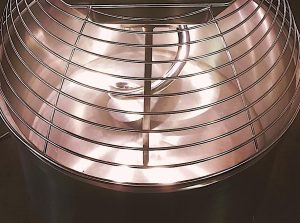 Used in both artisan and industrial environments the spiral mixer is a machine that mixes flour with water, yeast and other ingredients.

The spiral mixer consists of a steel cylindrical-shaped bowl with a shaft in the middle and a steel spiral which is the main working organ. What distinguishes this machine from the planetary mixer is the double movement. Both the bowl, which rotates clockwise or anticlockwise on its axis during the mixing phase, and the spiral that rotates around its vertical axis. This double movement therefore facilitates the kneading, making it soft and homogeneous. To give greater elasticity to the dough is the fixed central shaft, that is, a dough-breaker arm that prevents the compound from becoming a single block of dough.

The spiral mixer is recommended especially for dough that needs a good structured mixing process, such as soft doughs, for example that of bread or pizza. 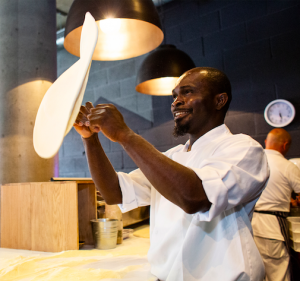 Which type of Spiral mixer to choose for Pizza?

There are hundreds of different spiral mixers commercially available on the market with different dough capacity and different prices. So, which one is the best mixer?

“The bitterness of poor quality remains long after the sweetness of low price is forgotten.”

Other features that distinguish a professional mixer from a medium-low end one concerns the materials and strength. Weight is certainly a factor that offers an indication regarding strength and components but observing the quality of materials used in the production is an important part of an analysis that should be as accurate and thorough as possible. In a professional machine designed for use in pizzerias, the bowl, the rotation shaft, are all components produced in heavy duty stainless steel.

The spiral, which generates a pressure from top to bottom (based on the shape of the spiral itself), and the presence of a central shaft that serves to hold and better expose the dough to the spiral itself. The spaces/distance between spiral and shaft in a high performance mixer is very tight. 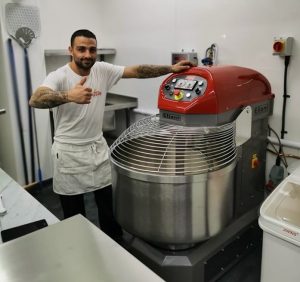 Another important factor to be assessed is the speed. Professional high-performance spiral mixers have 2 speed or in certain cases there are some machines you can regulate the speed of the bowl and spiral up to 18 different speeds.

Having the option to change the speed is essential in order to produce high hydration dough or indirect method such as using “biga” or sourdough. In most top range spiral mixers with more than one speed, they will be equipped with a bowl-reverse system which allows the bowl to rotate in both directions. This is vital to create “biga” or to help take the dough out from the mixer once it is ready.

The first speed is generally used for the initial mixture of ingredients, the second for giving structure to the dough creating a stronger bond between the gluten’s proteins. Moreover, it helps to oxygenate the dough giving a bigger volume to the final products.

–      Increases quality and consistency of our dough.

For more information and videos on Spiral Mixers click here.

We offer competitive pricing, fast turnaround time and leading customer services.
Shop By Type
Pizza Peels
Pizza Accessories
Kitchen Accessories
Pizza Pans And Screens
Oven Accessories
Storage
GDPR Cookie Consent: We use cookies to ensure you get the best experience on our website. By clicking “Accept”, you consent to the use of ALL the cookies.
Cookie SettingsAccept
GDPR Cookie Consent

This website uses cookies to improve your experience while you navigate through the website. Out of these, the cookies that are categorized as necessary are stored on your browser as they are essential for the working of basic functionalities of the website. We also use third-party cookies that help us analyze and understand how you use this website. These cookies will be stored in your browser only with your consent. You also have the option to opt-out of these cookies. But opting out of some of these cookies may affect your browsing experience.
Necessary Always Enabled
Necessary cookies are absolutely essential for the website to function properly. These cookies ensure basic functionalities and security features of the website, anonymously.
Functional
Functional cookies help to perform certain functionalities like sharing the content of the website on social media platforms, collect feedbacks, and other third-party features.
Performance
Performance cookies are used to understand and analyze the key performance indexes of the website which helps in delivering a better user experience for the visitors.
Analytics
Analytical cookies are used to understand how visitors interact with the website. These cookies help provide information on metrics the number of visitors, bounce rate, traffic source, etc.
Advertisement
Advertisement cookies are used to provide visitors with relevant ads and marketing campaigns. These cookies track visitors across websites and collect information to provide customized ads.
Others
Other uncategorized cookies are those that are being analyzed and have not been classified into a category as yet.
SAVE & ACCEPT